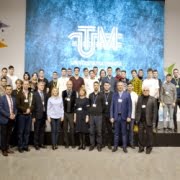 Between December 12th and 14th, the International Student Competition for Mobile Robotic Systems and IoT Services “EARTH ROVER: Connecting Things – 2019”, organized by the Fablab Chișinău and the ICT Center of Excellence in the field of ICT, was organized by Faculty of Computers, Informatics and Microelectronics, UTM.

The theme of the contest was inspired by the famous Christmas comedy film “Home Alone”, and the teams had the challenging task of developing a system that mimics the behavior of a living company, educational, or service, monitoring, guidance provider, within 24 hours. For testing their projects, the layout of an apartment was used to simulate different case situations (gas leakage, smoke, open fire, temperature, humidity, etc.).

The devices needed to develop the projects were offered by the contest partners: USAID Moldova, Orange, Allied Testing-Moldova, Amdaris and ICG Engineering.

The competition aimed to integrate Mobile Robotic Systems and Internet of Things (IoT) technologies. The IoT or Internet of Things is a concept that defines a world in which physical objects – devices, vehicles, buildings, industrial equipment and other elements, incorporated with electronic equipment, actuators, sensors and software – are connected to each other through the Internet to be supervised and controlled.

The presentation of the final projects took place on Friday, December 13th, 2019, at 14.00 in the Imaginarium room of the Tekwill ICT Center of Excellence. The official ceremony was attended by the rector of UTM Viorel Bostan, the dean of FCIM Dumitru Ciorbă, the interim head of the Economic Development Department of the USAID Moldova Mission Steven Welker, USAID project manager Sergiu Rabii, guests from the institutions and businesses in the field.

The jury of the competition, made up of professionals in the field: Dinu Țurcanu, vice-rector of UTM; Eugeniu Gavrev, Orange Systems; Dmitri Calugari, ICG Engineering; Veaceslav Nastasenco, Allied Testing – had the difficult task of choosing from the 11 projects the most original and creative one. As a result, the following prizes were awarded:

All participants received diplomas of participation.

New educational partnerships between members of the eTwinning community

This site uses cookies. By continuing to browse the site, you are agreeing to our use of cookies.

We may request cookies to be set on your device. We use cookies to let us know when you visit our websites, how you interact with us, to enrich your user experience, and to customize your relationship with our website.

Click on the different category headings to find out more. You can also change some of your preferences. Note that blocking some types of cookies may impact your experience on our websites and the services we are able to offer.

These cookies are strictly necessary to provide you with services available through our website and to use some of its features.

Because these cookies are strictly necessary to deliver the website, refuseing them will have impact how our site functions. You always can block or delete cookies by changing your browser settings and force blocking all cookies on this website. But this will always prompt you to accept/refuse cookies when revisiting our site.

We fully respect if you want to refuse cookies but to avoid asking you again and again kindly allow us to store a cookie for that. You are free to opt out any time or opt in for other cookies to get a better experience. If you refuse cookies we will remove all set cookies in our domain.

We provide you with a list of stored cookies on your computer in our domain so you can check what we stored. Due to security reasons we are not able to show or modify cookies from other domains. You can check these in your browser security settings.

These cookies collect information that is used either in aggregate form to help us understand how our website is being used or how effective our marketing campaigns are, or to help us customize our website and application for you in order to enhance your experience.

If you do not want that we track your visit to our site you can disable tracking in your browser here:

We also use different external services like Google Webfonts, Google Maps, and external Video providers. Since these providers may collect personal data like your IP address we allow you to block them here. Please be aware that this might heavily reduce the functionality and appearance of our site. Changes will take effect once you reload the page.

The following cookies are also needed - You can choose if you want to allow them: