One of the revelations of the Conference for the completion of the PBLMD program was the invitation on stage of the UTM student Ana Țurcanu, third year, who follows the study program “Software Engineering”, to which the PBLMD program was implemented, and because of this, she benefited from an internship mobility in Denmark, at Aalborg University, where she studied Robotics during a semester. Ana described her experience there and how PBLMD helps students discover a different learning and teaching method.

“- I had the honor to be part of the first generation of students who benefited from the mobility within the PBLMD project, says Ana. Initially, when I became acquainted with this new term, I understood that it would be a challenge, as I and my colleagues were accustomed until then to work individually, without too much collaboration and, sometimes, to be evaluated subjectively. However, due to the course of personal and professional development that was included in the curriculum in the first year of university, those who had problems regarding collaboration and teamwork began step by step to cultivate these skills, so that the semester project went beyond the common academic topics framework, being more exciting, interactive and very useful. Since the second year, we have had the opportunity to practice in real companies – a very valuable thing for a student, and in the third year, many of us are already employed in the field of work, in renowned IT companies and this is because those who study according to the PBL methodology correspond to the requirements of these companies, having the ability to work in a team, to be responsible, punctual and, of course, to identify and solve problems, to analyse them laterally and analytically, from several perspectives.

I went to Aalborg with some colleagues from the faculty, but also from other universities in the country. In total, there were about 15-20 Moldovan Erasmus+ students in the city of Aalborg. I had 50 colleagues from different countries. We only met during class hours, and at practice sessions we were divided into teams of six (the same throughout the semester) and we worked together in rooms reserved for each team. Sometimes, together with the team, we would spend Sundays in our office to work on projects. Teamwork is what I found unique and different in organizing the study process there – every hour of class was followed by one hour of teamwork, and the hours with teachers were reduced just to have a longer time to work and collaborate as a team. This was for me a suggestion that I later brought home, at UTM, where this methodology is also already being implemented, having fewer hours of training and more time being allocated for teamwork.

The slightly different classes that I had the opportunity to study were: Structured Systems and Product Development – I learned the phases of analysis and design of a product; Modeling and Simulation of Robotic Manipulators – I learned what a robotic manipulator means, direct kinematics and inverse kinematics, using software applications to model the robotic cell and to simulate the trajectory of the robotic arm.

I learned how to write a scientific report, in correct and advanced form, which I will need in the future. I also learned to work in a team where everyone is different, with their own personalities and opinions, which I sometimes found hard to agree with. I would like to mention that my team was multi-international: two colleagues from Lithuania, one from India, one from Denmark, one from Brazil and another colleague from Moldova. So it’s obvious that ideas and opinions have often been different, but we managed to be successful in the end. And last but not least, the course hours offered me knowledge in spheres that I could not study at home, knowledge that I am sure will help me in my professional future. I also came with a multitude of ideas and organizational suggestions for the curriculum of UTM, one of them being the inclusion of team working hours in a timetable immediately after each class hour” explains Ana.

Referring to the difficulties she faced during his studies at Aalborg while working in a team, she mentioned the time management, the mutual motivation that she had to maintain in the team. “These situations, which we found difficult initially, proved to be advantages that we had the opportunity to benefit from. “

She came back from Denmark with new knowledge and says that the PBL method will help her to be more confident, to easily apply the new experience, which will help her build a professional future at home. The young lady plans to work for an IT company in Moldova and contribute to the development of the information technology sector in the country. 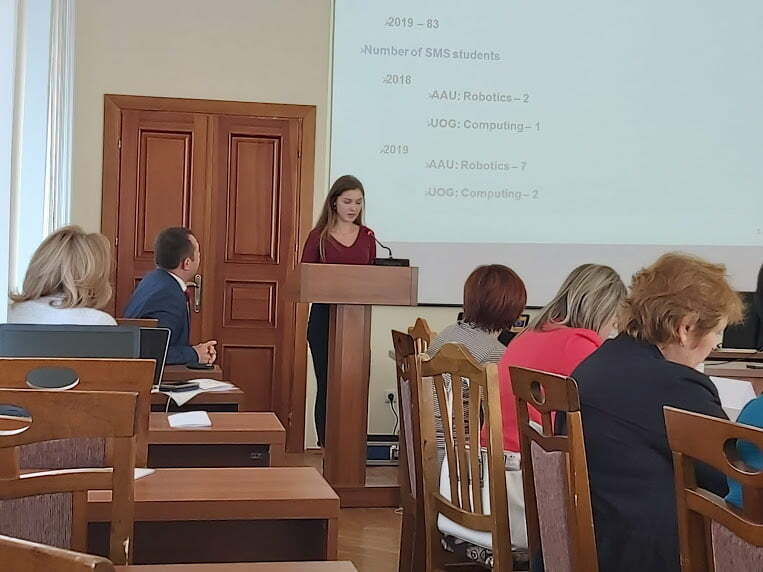 The PBLMD project at its finish

Are you a UTM student? Meet the “Student Trip” challenge!
Scroll to top